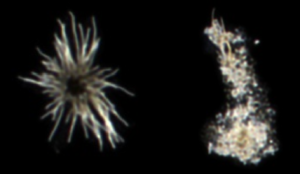 The heart wants what it wants, but what it wants most is to pump. The thump thump squeeze of atria and ventricles pass blood fresh with oxygen into arteries, organs, cells.

Out here, in the heart of the sea, the ocean wants to pump too. This one, though, is a bit harder to see or hear. I’ll explain: the ocean creates a habitat for microscopic phytoplankton at the sea surface, where a miraculous reaction takes place: sunlight and air transforms into stuff. Specifically, phytoplankton capture light energy to transform carbon dioxide gas (a.k.a. CO2) into organic carbon (the di-oxide part from carbon dioxide is released as di-oxygen gas – what we breathe in, what flows through our blood, our bodies).

But there’s a catch. Unlike carbon dioxide gas and light, the organic carbon that makes up phytoplankton biomass feels the tug of gravity. It starts to sink. Phytoplankton may sink slowly at first, but their descent quickens as they are grazed, digested, compacted, and (ahem) expelled back out. In this new state, biomass sinks out of the sunlit ocean and down into the abyss.

Still, the ocean is very deep and it might take several months for biomass to sink from the ocean’s surface to the seafloor. Many such particles will never get there. Like leftovers spoiling in a refrigerator, someone’s trash is another’s treasure. The deep ocean is the world’s largest food desert, and so when something digestible passes by – no matter how gross – its thanksgiving to the microbes living there. Like us, these microbes eat organic carbon, breathe in oxygen, and burp out carbon dioxide (which dissolves in deep ocean seawater).

So the ocean’s heart – its carbon pump – moves carbon dioxide from the surface ocean into the deep sea. This deficit of carbon dioxide gas at the sea surface allows CO2 from the atmosphere to dissolve into surface waters, where it too can get pumped down into the abyss.

We’re all hoping that the ocean’s carbon pump is resilient to global warming and climate change – in fact we’re relying on it to take much of the atmospheric CO2 that we humans have released and sequester it in the deep sea. But there’s still reason to be vigilant. There’s evidence from the past that the carbon pump can change, and that these changes have global consequences. In fact, an unusually strong carbon pump tens of thousands of years ago led to an ice age, storing more carbon dioxide in the deep ocean, with less in the atmosphere. The opposite of modern climate change where high CO2 leads to global warming, lower amounts of CO2 in the atmosphere of the past cooled the planet, helping to build massive glaciers worldwide.

Although a number of phytoplankton species can grow at freezing temperatures, if the ocean gets too warm, many won’t survive. A major worry about modern global warming is that overheated phytoplankton might make the carbon pump less efficient, and that this will slow CO2 removal from the atmosphere. Warmer oceans might also inspire bacteria to degrade organic matter more quickly – similar to food left out in the open will go bad fast compared to food in the fridge – and so fewer particles may sink to the deep ocean.

What we’re doing out here, in essence, is a check-up. Scientists have been coming to this location – Station ALOHA – for the last 40 years, tracking how many phytoplankton are growing in the surface, and how much is sinking to the deep. We’re here to pitch in: continuing this vital record of ocean health will allow changes in the biological pump to be diagnosed early on. The moving parts of the ocean’s carbon pump may be too small to see, but its too important to ignore.