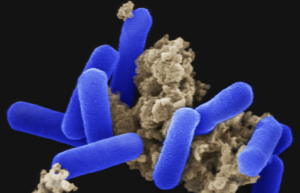 Microbes are the most abundant form of life in the ocean, the largest biological system on Earth.  While they are generally too small to be seen by the unaided eye, there are 100 million times as many microbes in the oceans (13 × 1028) as there are stars in the known universe.  However, for every creature on earth, big or small, there is a time to be born and a time to die.  Death sustains new life in the ocean and microorganisms are essential for converting the products of decay into the nutrients of life.  They grow by assisting digestion in guts of marine animals, by consuming animal waste and decay, and by capturing the energy of the sun.  They too are eaten, and their small bodies and the nutrients released at death sustain all life in the sea.  A very important nutrient is ammonia, a form of nitrogen that is used to make protein and DNA essential to all life.  For over a century we did not know what marine microbes were responsible for converting ammonia to other bioavailable forms that can close the circle of life in the oceans.  We now know because of research conducted at the Seattle aquarium by investigators at the University of Washington.  These scientists isolated the responsible microbe from a tropical marine fish tank at the Seattle Aquarium in 2005.  Remarkably, this organism is only very distantly related to other forms of sea life.  It is a member of the Archaea, an evolutionary branch of life that diverged from animals, plants, and bacteria over three billion years ago.  This novel microbe was named Nitrosopumilus maritimus, a Latin name that translates to “the dwarf nitrifier of the sea”.  Nitrifiers oxidize the ammonia originating from decay into nitrate, a form of nitrogen sustaining most microbes and algae in the sea.

Although very small (4 million could fit on the head of a pin), because marine ammonia-oxidizing archaea are among the most abundant organisms in the ocean, accounting for 20% of total marine microbes, they control the production of nitrate.  Their remarkable success is attributed to the ability to grow on only a whiff of ammonia, just one teaspoon of household ammonia added to an Olympic size swimming pool would keep them actively growing.  Besides their prominent role in nitrogen cycle, ammonia-oxidizing archaea also make a significant contribution to the marine carbon cycle through CO2 fixation, the production of the greenhouse gases nitrous oxide and methane, and the provision of vitamin B12 to primary producers like algae in oceanic systems.  Beyond the marine environments, members of ammonia-oxidizing archaea have also been found in a wide variety of habitats, including soil, freshwater, wastewater, and hot springs.  They are now considered as one of the most widely distributed organisms in Earth`s biosphere, reflecting their remarkable ecological adaptation.